A History of Leadership, Community and Vision 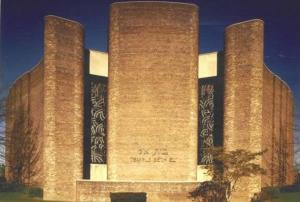 The genesis of Temple Beth El history dates back to 1865, when the first Jewish families came to Rochester determined to maintain traditional Jewish life in their new homeland. Beth Israel, better known as the Leopold Street shul, was founded at that time, and for many years thereafter was the stronghold of Traditional Judaism in Rochester. At the turn of the 20th century, the new movement of Conservative Judaism was beginning to appear on the American scene and influenced the thinking of Rochester Jewry.

Thus begins the history of Temple Beth El as we now know it, as a handful of men applied themselves resolutely to the task of establishing a modern conservative Synagogue.  Theirs was an ideal vision: a house of worship which would appeal to both old and young; in which all that is best in Jewish life and in modern thought could be beautifully harmonized.

The vision of these thought pioneers paralleled the growth of Conservative Judaism in America. As this movement grew in the country, the vision took shape in the minds of these visionary men and women. By 1915, the time was ripe for a Conservative congregation in Rochester.

Ten men gathered in the home of Louis Frankel on November 28, 1915 for the purpose of organizing a new synagogue aligned in the traditions and practices of the fledgling conservative movement.

The group consisted of:

A temporary organization was formed with Charles Frankel as President and Isaac Joffe as Secretary. They called it a “New Conservative Congregation along Modern Lines”. By February of 1916, this group had consolidated its strength and formed itself into a permanent organization. Isaac Joffe was named president. With him were Louis Shulman, first vice-president; Jacob if Goldstein, recording secretary; Alfred Hart, financial secretary; and Louis Frankel, treasurer.

The newly formed congregation began its search for a home almost immediately after the formal work of approving a constitution and signing a certificate of incorporation was completed. The first proposed site was a house at 310 Oxford Street. However, the erection of a synagogue at the Oxford Street location offered special problems, which seemed insurmountable.

When an opportunity presented itself to purchase the Baptist Church at the corner of Meigs Street and Park Avenue, the congregation purchased it. On November 13, 1916, the membership was informed that the building had been acquired for the sum of $45,000, exactly one year after the organizational meeting in Louis Frankel’s home.

On May 20, 1917, the formal dedication took place and Temple Beth El became an integral part of the Jewish life of Rochester and a vital force in our community. The sanctuary seated 600. The building also had a small meeting room and offices on the main floor and an auditorium on the upper floor. Dr. Joel Blau was hired as the first rabbi and he officiated at the first services held in the new Temple for Shavuot of 1917.

In the meantime, Temple life was becoming very active. Sisterhood was formed as well as Men’s Club. There were four committees at that time — Finance, School, House and Ritual. Sunday school became very busy, as well as the afternoon school that was held Monday through Thursday. Men’s Club’s many activities included the annual picnic, a committee to visit the sick and, more recently, the Yizkor Memorial for the Holocaust. They also sponsored interesting topical breakfast meetings and other events.

Sisterhood’s many functions were the bazaar, which continued into the early 40’s; the Thanksgiving Dance and Nearly New Sale — both into the late 80’s; and the support of the library that was formed in 1946. Sisterhood quickly grew into a vital adjunct of the Temple. Socially, culturally, financially and spiritually, Sisterhood integrated itself fully into the life of Temple Beth El.

Sisterhood’s most illustrious president was Ray Aiole. She served as its president for 20 years, and to this day, the Young Women’s Leadership Award of the Jewish Community Federation is named after her.

Both Men’s Club and Sisterhood continue to be very important to the life and vitality of Temple Beth El.

Temple Beth El’s egalitarian traditions are long standing. The Annual Dinner of 1935 invited “Members and wives” to attend. In 1949, Sisterhood President, Ruth Dankoff, became the first woman to officially represent Sisterhood on the board as a voting member. Women have long been members, and receive aliyot.

By the mid 1930’s the school was growing rapidly and one house adjacent to the Temple was purchased and turned into classrooms. Later, in 1944, a second house was purchased, also for classrooms.

The 1930’s were difficult years for all institutions because of the Depression, but in spite of the problems facing the country, activities at Temple Beth El grew, as did its membership.

1942 brought the 25th Anniversary of Temple Beth El — a strong congregation, striving to fulfill the 3-fold purpose of a synagogue — bet hatfilah, bet hamidrash, and bet haknesset — a house of worship, a house of study, and a house of assembly for Jewish people.

The school continued to grow and in 1943, Benjamin Rosenthal suggested that a new school building was really needed and donated $5,000 to get the project started. Planning began and much discussion ensued, but it wasn’t until 1950, when 7 acres of land at Winton Road and Hillside Avenue was donated to Temple Beth El by Mr. & Mrs. Irving Norry and Mr. & Mrs. Benjamin Bernstein, that a school building and auditorium were to become a reality. By that time, there were 300 children in attendance at the afternoon Hebrew school and almost the same number of pre-school and post b’nai mitzvah children attending Sunday school.

The school thrived and plans were drawn for the expansion of the complex, including our beautiful sanctuary but not until the fire at the Park Avenue Synagogue on January 23rd, 1960 which destroyed the Park Ave Synagogue, did the need become much more urgent.

A capital campaign was begun in 1960. “These were the visionaries who worked on raising the funds whose foresight enabled us to move ahead”. Groundbreaking ceremonies for the Sanctuary and School were held on November 5, 1961. In the meantime, religious services were conducted in the Winton Road auditorium. The dedication ceremony for the new sanctuary was held on May 19, 1963.

The congregation continued to grow, as did the school. By that time, membership had increased to 1400 families with a school of 700 students! Throughout the 1960’s and 70’s, our Director of Education was Jay Stern— a legend in Jewish education. During this time, many dance festivals were produced under the direction of Molly Shafer Rutzen and some of the best-known musicals of the time were performed in Hebrew by students of the school.

The entire complex remained essentially as built until a major renovation took place in 2001 through the generosity of many devoted Temple members.

In addition to our strong and dedicated synagogue community, Temple Beth El has benefited from strong and forward looking leadership. Throughout our history, we have been blessed with the spiritual leadership and guidance of our rabbis which have included:

Special mention also needs to be made of Rabbi Abraham Solomon, who served Temple Beth El for 60 years, and for whom our chapel is named.

We are fortunate to have been served over the years by gifted and dedicated hazzanim:

We would be remiss in telling the history of Temple Beth El if we didn’t give special recognition to Hazzan Samuel Rosenbaum, who served the Temple for 40 years. He was a cantor, a yiddishist, an author, a composer, a teacher, a musician, an eloquent speaker and a superb writer and leader who’s vision helped shape the American Cantorial Institute.

Throughout the years, Temple Beth El has enjoyed a dynamic partnership between its clergy and lay leadership:

Their combined vision and commitment have provided the framework upon which our congregation has grown and thrived. Temple Beth El continues to be a source of great strength and pride in the Rochester Jewish Community.

Many programs and milestone events that have enhanced our lives have been held here at Temple Beth El.

And now, we look to the future. Our Keshet pre-school has served as a wonderful addition to our already vibrant and excellent educational programming. Together with our dedicated professional staff and teachers, we are confident in our ability to provide future leaders who will again serve as visionaries and builders of an even stronger and brighter future for Temple Beth El.

L’dor v’dor, from generation to generation and Hazak v Nitahazak, from strength to strength.