You are here: Home » Who We Are » Spiritual Leaders 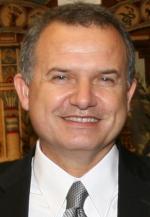 Rabbi Leonardo Bitran is one of the few leaders of the Conservative Movement whose experience includes serving synagogues across the continent, inspiring nearly a dozen of his former students to become rabbis, and mentoring rabbinical students serving Latin American congregations.

Rabbi Bitran grew up at the Sephardic Synagogue in Santiago, Chile. Influenced by his parents and religious leaders he began leading religious services on Shabbat and High Holy Days at Bar Mitzvah age.  He attended the school of Economics at the University of Chile, the Seminario Rabinico Latino Americano in Buenos Aires and The Jewish Theological Seminary of America in New York.

Rabbi Bitran served at Congregation Shaarey Zedek in Southfield, Michigan, where he led its vibrant satellite congregation, B’nai Israel, for eleven years. Most recently and for ten years he served Congregation Agudas Achim in San Antonio, Texas, enabling it to achieve excellence in Jewish education.  At Temple Beth El, Rabbi Bitran aspires to lead and inspire our Temple to be a model and center for Conservative Judaism.  Together with his colleague, Hazzan Levin, Rabbi Bitran is committed to building strong relationships and a caring community, dedicated to worship, study of sacred texts and the creation of a kind environment for its members.

Hazzan Randall Levin enjoys leading the congregation in prayer and song on Shabbat, holidays and special occasions, and serves as a teacher, mentor, and resource for congregants of all ages. The Hazzan is also charged with leading Temple Beth El’s outstanding b’nei mitvah program, tutoring many of the students himself. Prior to coming to Temple Beth El, Hazzan Levin served as the Cantor at the South Huntington Jewish Center in Melville, New York, and at the Highland Park Conservative Temple Congregation Anshe Emet in Highland Park, New Jersey.  Hazzan Levin holds a master’s degree in Sacred Music and Liturgy from the Jewish Theological Seminary’s Miller Cantorial School and College of Jewish Music, where he was fully invested as a Hazzan in 2014. While at the Seminary, Hazzan Levin received numerous awards and scholarships, while pursuing curricular concentrations in Jewish liturgy, worship theory and ritual practice, culminating in his thesis work, “Hazzanut as an Extension of the Rabbinic Mind.”  Hazzan Levin has taught and lectured on a wide range of topics including spirituality, emotion and meaning in synagogue music, public versus private prayer, the social function of synagogue song, and Hassidic influences in synagogue music.

Originally from Akron, Ohio, Hazzan Levin attended Beth El Congregation, where he sang in the Beth El Synagogue Choir under the tutelage of Hazzan Stephen Stein. Hazzan Levin received his Bachelor of Music in Vocal Performance from the University of Akron School of Music before completing his graduate studies at the Cincinnati College-Conservatory of Music. Hazzan Levin is a past Fellowship recipient at the Aspen Music Festival, where he performed a leading role under the baton of legendary New York City Opera maestro Julius Rudel.  He has appeared professionally as a soloist in opera and concert productions in the United States and Europe, in addition to teaching private voice lessons.

Hazzan Levin and his wife Emily reside happily in Rochester with their two sons, Henry and Michael.